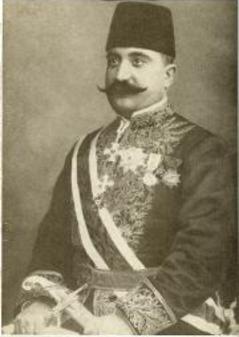 For it was through Massehian's unequalled translations that the great dramatist was immortalized to the Armenian reader.

Years have passed since the death of Hovhaness Khan Massehian, but the passage of time has not been able to obliterate the name of the man who was not only an erudite scholar but a prominent diplomat as well, and who rendered his county meritorious services.

Hovhaness Khan Massehian Mossaed-Ol-Saltaneh was born in Tehran on February 28 1864.His father,Agha Tserooni,a jeweller by proffession,was the head goldsmith at the court of Nassr-ed-din-Shah, and his works are among the most beautiful and delicate produced in the country.

We can cite as an example the Jewel Globe,now among the collection of the Crown Jewels kept in the vaults of the Central Bank of Iran.Agha Tserooni was a kind and upright man.Being a good and loving father, he spared no effort in the education of his children.Hovhaness Khan's mother,Anna,ne'e Yervandian,who came from an intellectual family,was a well -educated and self sacrificing woman.In this congenial family atmosphere Hovhaness Khan seems to have aquired all the fine qualities of his parents.

Hovhaness Khan received his primary educatin at the Armenian parsonage school of Shah -Abdol-Aziz under the tutorship of Usta Mekertoom.  In1870 a group of Armenians,headed by Messrs, Michael Markarian and Hovsep Gasparian,founded the first Armenian public school called HaykazianSchool.The same year Hovhaness Khan enrolled in the school from which he graduated with distinction in the year 1878.As a result of his aptitude for

learning and his father's keen desire to give his son a sound education,he was sent to Tabriz,to his maternal uncle Anton Khan Yervandian,a learned man,  who at the time was the preceptor of Nassr-ed-din Mirza,the heir to the throne.  Because he had mastered the French and English languages,  Anton Khan was also the official interpreter of the Tabriz court.

After a period of three years,  Hovhaness having proved himself an apt pupil of the French language,was sent to Paris in 1882 to further his studies.  Apart from the social and political sciences,which were his main subjects ,he followed at the same time courses of literature and history at the College de France.

After spending three years in Paris, Hovhaness Khan returned to Tehran at the end of 1884,and soon was given a post among the court translators.  During this time, besides his official duties as translator, he made a series of translations from European writers including amongst others Alexander Dumas, Pierre Loti, and Charles Dickens for Nassr-ed-din Shah.  These translations which numbered more than 50,have unfortunately, not come to light but we think we can confidently trust what has been told us by a relative of Hovhaness Khan's who states that these translations were written, in a single copy, by the court caligraphers, and presented to the Shah,as they were meant for the Shah's own perusal, and not for printing.

In 1887 the 50th year of the reign of the Queen Victoria was being celebrated and an Iranian delegation, headed by the the Shah's Special Envoy, Prince  Hessam-ol-Saltaneh,was sent to England.  Hovhaness Khan was a member of that delegation, and its first dragoman.  In 1894 he went to St Petersburg in the same capacity, with a delegation headed  by Amir Khan Sardar, to be present at the coronation of Tsar Nicolai the Second.

In 1897 Hovhaness Khan Massehian was again sent to London to convey the Shah's congratulations to Queen Victoria on the occasion of her 80th birthday.  In 1900 he was nominated Counselor to the Iranian Embassy in Berlin, where he stayed for eleven years.

Hovhaness Khan was fluent in seven languages.  In 1911 Hovhaness Khan was back in Tehran and was appointed as Chief of the Secretariat to Abolghassem Khan Gharagozlou,at the time the Nayeb-ol-Saltaneh(Regent).

At the end of 1921,despite a stipulation in the Law of the Realm,  according to which a non-Moslem could not hold an ambassadorial post, on the insistence of Nassr-ol-Molk, the  then Nayeb-ol-Saltaneh,he was nominated to the post of the Iranian Ambassador to Berlin.

In 1927 Hovhaness Khan was elected to Parliament as the representative of the Armenians of Southern Iran but soon afterward had to resign, in order to assume his new duties as Ambassador Plenipotentiary to London.

In 1929 the Iranian Government decided to establish diplomatic and commercial relations with Japan and Hovhaness Khan Mossaed was deemed the most suitable person for that purpose.  He was sent to Tokyo , as Iran's first Ambassador to that country. For the services rendered in that capacity he was rewarded with the Order of Merit by both the Japanese and Iranian Governments.

The climatic conditions of Japan, however ,proved harmful to him, and due to his bad health he was forced to resign from his post.Permission was granted for him to return home, but unfortunately he succumbed en route.

He passed away on the 19th of November ,1931,in a hospital in Kharbin,with not even a single acquaintance at his death bed.  The French Consul in Kharbin,who was also in charge of the affairs of Iranian nationals, seeing the name H.K.Mossaed in the passport, and supposing that an Iranian Ambassador should perforce belong to the Islam religion arranged for his burial. But in recognition of the services which Hovhaness Khan had rendered his country, the Iranian Government arranged for  his remnants to be transported to Tehran.  Hovhaness Khan Massehian's body reached Tehran on the 31st of March 1931and was buried in ,with unprecedented solemnity in the Vanak Church courtyard, and years later was transported to his final resting place St Mary's Church, in Tehran.

Shakespearian translator, his translations are:

As we have already said no one was present at Hovhaness Khan Massehian's death-bed and no one heard his last words and, in the absence of any will ,a part of his literary works have remained hidden.  For , on his many travels, he could not always be burdened with piles of papers. There is reason to suppose therefore, that some of thesis had been entrusted to friends in different parts of the world, and after his death were never returned to his family.  One of these works is the translation of Shakespeare's "Timon Of Athens" which, according to the testimony of Dr. Zavriev (Hairenik magazine edited in the U.S. January 1933 issue) had been given to an editor in Paris.

Hovhaness Khan, however ,was not satisfied with the samples of proofs that the editor presented to him, and the work was terminated then and there.  But what became of the manuscript is not known,and searches to find it have proved unfruitful.

Hovhaness Khan Massehian's work, was sent to Yerevan, throughout the years, by his nephew, Mr. and Mrs. Arik and Vera Massehian, and Hovhaness Khan's sister, Mrs. Zarouhi Massehian Kajberouni. and today it resides at:

National Academy of Sciences Of the Republic Of Armenia Institute of Arts 24 Marshal Baghramyan Ave.,Yerevan 19,Republic of Armenia